Book Description
'Man-Eaters of Kumaon' is the best known of Corbett's books, one which offers ten fascinating and spine-tingling tales of pursuing and shooting tigers in the Indian Himalayas during the early years of this 19th Century. The stories also offer first-hand information about the exotic flora, fauna, and village life in this obscure and treacherous region of India, making it as interesting a travelogue as it is a compelling look at a bygone era of hunting. No one understood the ways of the Indian jungle better than Corbett. A skilled tracker, he preferred to hunt alone and on foot, sometimes accompanied by his small dog Robin. Corbett derived intense happiness from observing wildlife and he was a fervent conservationist as well as a tracker. He empathised with the impoverished people amongst whom he lived, in what is today Uttarakhand, and he established India's first tiger sanctuary there. Corbett's writing is as immediate and accessible today as it was when first published in 1944.

Book Description
These stories are the true account of Major Corbett's experiences with man-eating tigers in the jungles of the United Provinces. 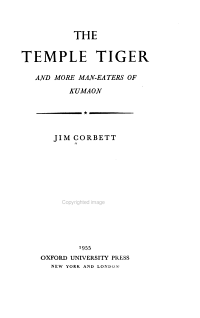 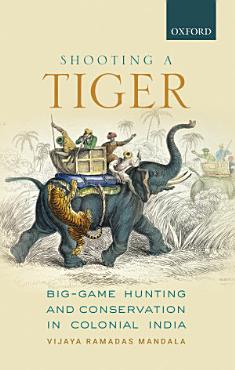 Book Description
The figure of the white hunter sahib proudly standing over the carcass of a tiger with a gun in hand is one of the most powerful and enduring images of the empire. This book examines the colonial politics that allowed British imperialists to indulge in such grand posturing as the rulers and protectors of indigenous populations. This work studies the history of hunting and conservation in colonial India during the high imperial decades of the nineteenth and early twentieth centuries. At this time, not only did hunting serve as a metaphor for colonial rule signifying the virile sportsmanship of the British hunter, but it also enabled vital everyday governance through the embodiment of the figure of the officer–hunter–administrator. Using archival material and published sources, the author examines hunting and wildlife conservation from various social and ethnic perspectives, and also in different geographical contexts, extending our understanding of the link between shikar and governance. 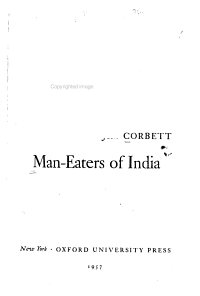 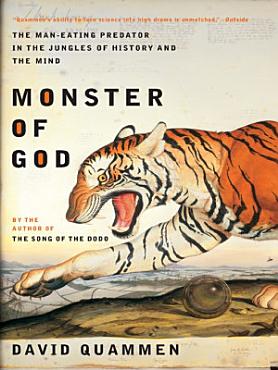 Book Description
"Rich detail and vivid anecdotes of adventure....A treasure trove of exotic fact and hard thinking." —New York Times Book Review For millennia, lions, tigers, and their man-eating kin have kept our dark, scary forests dark and scary, and their predatory majesty has been the stuff of folklore. But by the year 2150 big predators may only exist on the other side of glass barriers and chain-link fences. Their gradual disappearance is changing the very nature of our existence. We no longer occupy an intermediate position on the food chain; instead we survey it invulnerably from above—so far above that we are in danger of forgetting that we even belong to an ecosystem. Casting his expert eye over the rapidly diminishing areas of wilderness where predators still reign, the award-winning author of The Song of the Dodo and The Tangled Tree examines the fate of lions in India's Gir forest, of saltwater crocodiles in northern Australia, of brown bears in the mountains of Romania, and of Siberian tigers in the Russian Far East. In the poignant and troublesome ferocity of these embattled creatures, we recognize something primeval deep within us, something in danger of vanishing forever. 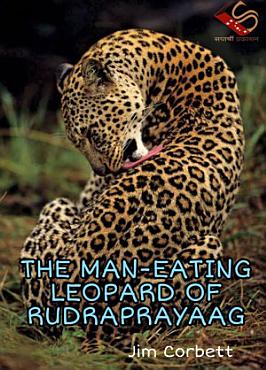 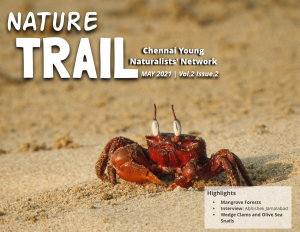 Book Description
A free e-Magazine written and published by Young Naturalists' based in Chennai. 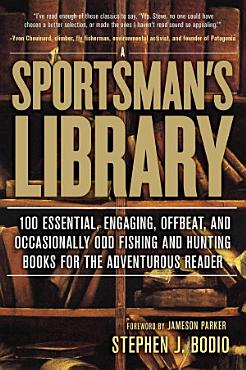 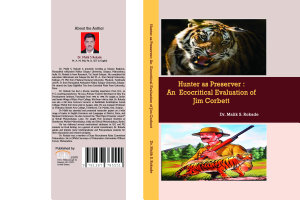 Book Description
The science of ecology as a faculty of study deals extensively with myriad aspects related to fundamental elements existing in the universe. Along with various aspects, manages cooperation between singular living beings and their surroundings, which incorporates connections with both nonspecific and individuals from different species. The interaction amplifies proportion and ratio of enquiry into relationship among various elements existing in environment and their interlinking; the aspect has proved to be beneficial in terms of internalizing characteristic features and delineate explicit patterns of ecology 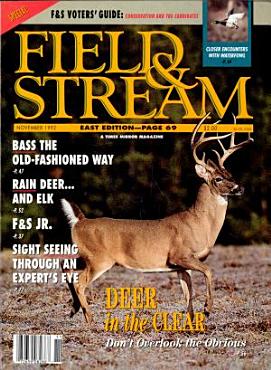 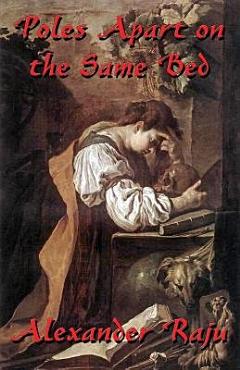 Book Description
Here's a fine selection of Alexander Raju's stories written over thirty years-ranging between the stories of a tyro giving expression to his idealistic perspective of the world and the society he lives in and intensely feels about, and those of a cynical angry man in quarrel with the world and its ways. They are poles apart also in the sense that the stories do not belong to any particular school: they range from humorous musings on the stupidity of men and women of his social milieu to harsh diatribes against the many evils rampant in his society. The most emotionally appealing are the author's renditions of the plight of the helpless female, sexually exploited by the male-dominated society. They are particularly poignant since they fictionalize not any feminist idea, but everyday reality we witness in our quotidian existence. Despite the universality of their themes, these stories falling under different heads have one binding chord: they relate to the social realities of Kerala, the south Indian state. About the Author: Alexander Raju, an Indian English poet, novelist, short story writer and columnist, has many books to his credit. "Ripples and Pebbles" (1989), "Sprouts of Indignation" (2003) and "Magic Chasm" (2007) are collections of his poems. His first novel "The Haunted Man" came out in 1997 and its second edition in 2009. "Upon This Bank and Shoal," a philosophical novel, came out in 2008. "The Psycho-Social Interface in British Fiction" (2000) is a critical work. "The Voice of Ethiopia and Other Pieces of Literature," an edited work came out in 2008. 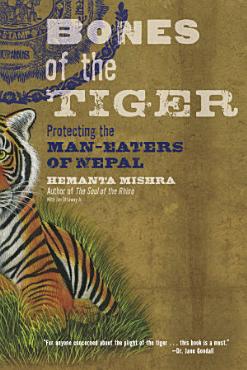 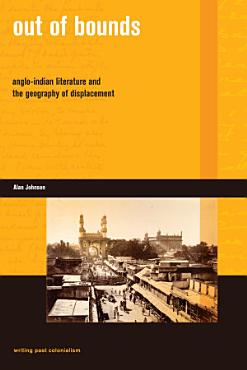 Book Description
Out of Bounds focuses on the crucial role that conceptions of iconic colonial Indian spaces—jungles, cantonments, cities, hill stations, bazaars, clubs—played in the literary and social production of British India. Author Alan Johnson illuminates the geographical, rhetorical, and ideological underpinnings of such depictions and, from this, argues that these spaces operated as powerful motifs in the acculturation of Anglo-India. He shows that the bicultural, intrinsically ambivalent outlook of Anglo-Indian writers is acutely sensitive to spatial motifs that, insofar as these condition the idea of home and homelessness, alternately support and subvert conventional colonial perspectives. Colonial spatial motifs not only informed European representations of India, but also shaped important aesthetic notions of the period, such as the sublime. This book also explains how and why Europeans’ rhetorical and visual depictions of the Indian subcontinent, whether ostensibly administrative, scientific, or aesthetic, constituted a primary means of memorializing Empire, creating an idiom that postcolonial India continues to use in certain ways. Consequently, Johnson examines specific motifs of Anglo-Indian cultural remembrance, such as the hunting memoir, hill station life, and the Mutiny, all of which facilitated the mythic iconography of the Raj. He bases his work on the premise that spatiality (the physical as well as social conceptualization of space) is a vital component of the mythos of colonial life and that the study of spatiality is too often a subset of a focus on temporality. Johnson reads canonical and lesser-known fiction, memoirs, and travelogues alongside colonial archival documents to identify shared spatial motifs and idioms that were common to the period. Although he discusses colonial works, he focuses primarily on the writings of Anglo-Indians such as Rudyard Kipling, John Masters, Jim Corbett, and Flora Annie Steel to demonstrate how conventions of spatial identity were rhetorically maintained—and continually compromised. All of these considerations amplify this book’s focus on the porosity of boundaries in literatures of the colony and of the nation.Out of Bounds will be of interest to not only postcolonial literary scholars, but also scholars and students in interdisciplinary nineteenth-century studies, South Asian cultural history, cultural anthropology, women’s studies, and sociology. 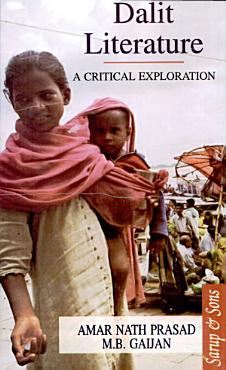